Aitutaki, the second most visited island in the Cook Islands group, is geologically part volcanic and part atoll.

Just 220 kilometers north and an easy 45 minute flight from Rarotonga, its lagoon is considered one of the most magnificient in the world.

Local legend claims that its highest hill, Maungapu, is said to be the top of Rarotonga’s Raemaru mountain that was chopped off and brought back by victorious Aitutaki warriors.

Polynesian myth holds that beautiful Aitutaki is a giant fish tethered to the seabed by a vine from the air. The light turquoise lagoon looks like a huge pale oyster against the vivid blue ocean.

Captain Bligh discovered Aitutaki in 1789, only 17 days before the notorious mutiny on the Bounty. Christian missionaries followed which meant it was the first island in the Cook Islands to receive Christianity. Today the people live in villages along the coastline and island interior. Most roads are tar sealed and transport is mainly by motor scooter, although bicycles and cars are also used to get people around.

The low rolling hills of the island are flanked by banana plantations and coconut groves.

A triangular barrier reef seems to catch the exquisite turquoise Aitutaki lagoon like a giant fishhook. The crystal clear water in the lagoon is ideal for sailing, swimming, snorkeling, kitesurfing, stand-up paddle boarding, kayaking, and scuba diving and beneath the blue surface is a world of sea creatures that will leave you fascinated. There’s also the elusive fighting bonefish which is favoured by anglers.

To reach the summit of Maungapu, take a leisurely half-hour walk to the west side of the island. At its peak you’ll discover a breathtaking view of Aitutaki. The shopping and business district is between Amuri and Ureia and also clustered near the wharf at Arutanga.

Aitutaki offers a range of accommodation for any budget and there are a few restaurants and cafés on the island for your dining pleasure. Live entertainment can be found at hotels or local watering holes.

Be sure to book a full-day lagoon cruise. There will be plenty of snorkelling opportunities and you can even hand feed schools of tropical fish and see giant clams up close. Some operators offer snorkelling gear and towels and serve a barbecue lunch when you arrive on an island.

A cultural day tour is an opportunity to discover, and interact with a culture that was hidden for 200 years as a result of the inf luence of the new culture that was adopted in 1821. Punarei Culture Village offers visitors the experience of engaging in some cultural practices such as making umukai, sharing stories of the ancient past and visiting sacred and scenic sites. Whale watching is a common sport most tourists partake in while here. If you visit Aitutaki between July and October, there is a good chance that you can spot them from the shorelines. Else, try going snorkeling or fishing, if you want to spot humpback whales. Kayaking is the perfect pick of activity for lazy afternoons. If you have some more energy, try going diving in the crystal clear waters of Aitutaki. You will get a good view of turtles, eagle rays, tropical fish, reef sharks and more. Snorkeling is a good way to go about exploring the diverse marine life in Aitutaki as well. Taro, bananas, coconuts and tropical fruits are abundant in Aitutaki, and in the local cuisine as well. Dairy products like milk are almost non-existent in the traditional food, but you will find vegetables, fruits and seafood in surplus. The food is often served on plantain leaves, in outdoor settings. Traditional food at Aitutaki includes coconut-fed pork, beef, lamb and chicken that is served with vegetables. One-foot Island in Aitutaki is speckled with lagoons and sandy beaches. It has the perfect setting for snorkeling, especially around the reef, away from the rocky ledges. You will also find the most secluded post-office here in One-foot Island. For one of the best swimming experiences in Aitutaki, you would want to stop by O’otu beach. Be sure to carry a pair of reef shoes and keep your eyes peeled, for you might just spot a hermit crab. 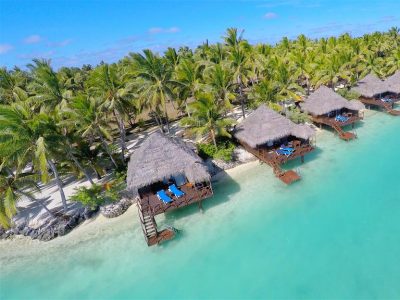 The Cook Islands are an archipelago of islands in the South Pacific Ocean, northeast of New Zealand, between French Polynesia and American Samoa. There are fifteen major islands spread over 2,200,00km2

The Cook Islands are an archipelago of islands in the South Pacific Ocean, northeast of New Zealand, between French Polynesia and American Samoa. There are 15 major islands spread over 2,200,00km2.

The two most renowned and popular tourist islands are Rarotonga Aitutaki Lagoon Private Island Resort
“No artist’s palette could ever conceive of a more perfect, more luminescent turquoise than that of the lagoon of Aitutaki, arguably the most beautiful in the world”, wrote Steve Davey in Unforgettable Places ... View More »